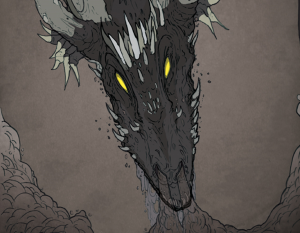 Lagharn is one of the Guardians of the City of Death. He takes his seat high above it, on a roost of carcasses. He circles the city lashing out the captive Seeds, removing from their minds any thought of escape. Lagharn was once a very small fear ghost over time and due to the deception of many Seeds he has built his appearance into that of a fearsome dragon.