This time evil is pitted against evil, Dark must battle Dark as the old foes Beltshazzar, Daytura and Nero fight for their very lives against the dragon siblings of Lagharn; Draconia and Spiteria! Lagharn 2 – Return to Draconia tells us of the giant scorpion armies that fought for the Dark Forces against our heroes Toowyn, Jonathan, Tanu, Rainer and Boulder the Frozen Warrior. Lost loves are reunited as evil empires try to take over the realm of the Dark and the Kingdom of Light! Whoever is first to find the lost Book of Wisdom will rule and it is a race to the finish! 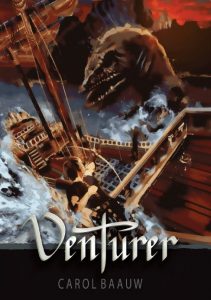 Once again our heroes are on a dangerous quest! Ice rivers carry fallen seeds to a frozen prison and only Toowyn, Chedwynn and their loyal entourage can save them. The Crew of the Ventura, led by Captain Caleb, sail bravely into battle against Nero, Daytura, Balthazar and Lynstra, doing battle for the King of Light and His Son! Many dangers and challenges await them across treacherous, icy seas but they are determined, empowered and above all else, assured of their victory… so long as their faith remains strong.

Lagharn the Dragon is just one of many legends in this anthology. Collected here are the legends of the Stone Princes, Boulder the Warrior, The Indian and the Book, The Cavern of Dry Bones, The Frozen Warriors and so much more. Toowyn returns with his trusted companion Jonathan as we meet new heroes and heroines; Tanu, Rainer, Narlia, Alleysia and Boulder the Frozen Warrior.

Once again good is pitted against evil, Light must battle Dark as the evil Beltshazzar, Daytura and Nero use their power to tempt seeds to surrender to their darker selves. Armed with special gifts and the courage of their faith in the King of Light, our band of heroes and heroines journey to the dark realms of their consciences to test themselves and their will to live a life of good and light. Failure means a fate worse than death… eternity in darkness.

Lagharn is also available on Amazon for the Kindle:
http://www.amazon.com.au/Lagharn-Journey-Seeds-Book-3-ebook/dp/B00L93A96M/

Journey of the Seeds kicks off with the release of Origins, the 64 page introductory book to the series.

Origins gives detailed backgrounds of many of the characters in the Mark of the Eagle, telling the stories of their past and describing their current positions, either under the good king and his Palace of Light

This novel takes you on a journey through Toowyn’s life.

Through the good and the bad times, through light and dark.

You will travel with him as he experiences love; pain and loss to a point were pain becomes unbearable so he choses a path in which he loses himself.

But light and love never give up and help him to the rediscover who he really is.

Toowyn is also available on Amazon for the Kindle:
http://www.amazon.com/Journey-Seeds-Toowyn-Carol-Baauw-ebook/dp/B00HV33WY0

Mark of the Eagle

Mark of the Eagle is the exciting tale of Toowyn’s quest to rescue his beloved Daneel from the depths of the Dark Lord’s realm. A classic Quest saga with Good pitted once more against Evil, Toowyn and his faithful friends battle the most insidious of evils, their own fears and failings, to carry out the mission given them by the King of Light Himself.

Along the way they save the essence of Seeds who have given up all hope and accepted the lies of the Dark Lord and his minions, the Spider Queen and Daytura, Balteshazzar and their dark, wicked, barbaric warriors.

Toowyn carries with him a deep, dark secret of a past life, a life where he was known as Axemuror, once the greatest Warrior the Dark Lord possessed. Will he succeed in his quest or will he find himself drawn back to the darkness that lurks within us all until the King shines His Light on our hearts.

Initially a graphic novel (illustrated by David ‘Snowy’ Shooter) and soon to be a motion picture, ‘Mark of the Eagle’ is Carol’s first full length novel and part of the ‘Origins’ series which includes: ‘Origins The Anthology’, ‘Journey of the Seeds’ and soon to be released; ‘Search for the Princesses’ and ‘The Valley of the Shadows’.

Mark of the Eagle is also available on Amazon for the Kindle:
http://www.amazon.com/Mark-of-the-Eagle-ebook/dp/B008124VMC/